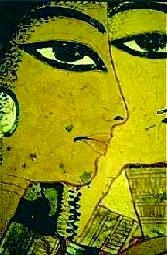 There is great variety in the Bible: prose and poetry, long and short stories, legal codes, songs and prayers, land claims, and practical advice. Hagar’s story is part of this rich variety, explaining the strong similarities and the marked differences between the Jewish people and their neighbours.

Hagar has a son, Ishmael

1 Now Sar’ai, Abram’s wife, bore him no children. She had an Egyptian maid whose name was Hagar;

2 and Sar’ai said to Abram, “Behold now, the LORD has prevented me from bearing children; go in to my maid; it may be that I shall obtain children by her.” And Abram hearkened to the voice of Sar’ai. 3 So, after Abram had dwelt ten years in the land of Canaan, Sar’ai, Abram’s wife, took Hagar the Egyptian, her maid, and gave her to Abram her husband as a wife.

4 And he went in to Hagar, and she conceived; and when she saw that she had conceived, she looked with contempt on her mistress. 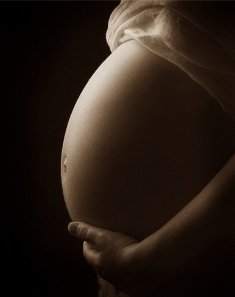 5 And Sar’ai said to Abram, “May the wrong done to me be on you! I gave my maid to your embrace, and when she saw that she had conceived, she looked on me with contempt. May the LORD judge between you and me!” 6 But Abram said to Sar’ai, “Behold, your maid is in your power; do to her as you please.” Then Sar’ai dealt harshly with her, and she fled from her. 7 The angel of the LORD found her by a spring of water in the wilderness, the spring on the way to Shur. 8 And he said, “Hagar, maid of Sar’ai, where have you come from and where are you going?” She said, “I am fleeing from my mistress Sar’ai.” 9 The angel of the LORD said to her, “Return to your mistress, and submit to her.” 10 The angel of the LORD also said to her, “I will so greatly multiply your descendants that they cannot be numbered for multitude.” 11 And the angel of the LORD said to her, “Behold, you are with child, and shall bear a son; you shall call his name Ish’mael; because the LORD has given heed to your affliction. 12 He shall be a wild ass of a man, his hand against every man and every man’s hand against him; and he shall dwell over against all his kinsmen.” 13 So she called the name of the LORD who spoke to her, “Thou art a God of seeing”; for she said, “Have I really seen God and remained alive after seeing him?” 14 Therefore the well was called Beer-la’hai-roi; it lies between Kadesh and Bered. 15 And Hagar bore Abram a son; and Abram called the name of his son, whom Hagar bore, Ish’mael. 16 Abram was eighty-six years old when Hagar bore Ish’mael to Abram.

The Covenant of Circumcision 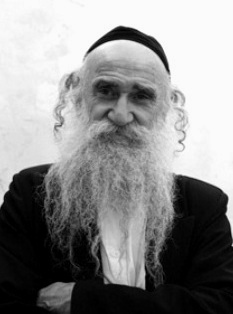 1 When Abram was ninety-nine years old the LORD appeared to Abram, and said to him, “I am God Almighty; walk before me, and be blameless.

2 And I will make my covenant between me and you, and will multiply you exceedingly.”

3 Then Abram fell on his face; and God said to him,

4 “Behold, my covenant is with you, and you shall be the father of a multitude of nations.

5 No longer shall your name be Abram, but your name shall be Abraham; for I have made you the father of a multitude of nations.

6 I will make you exceedingly fruitful; and I will make nations of you, and kings shall come forth from you.

8 And I will give to you, and to your descendants after you, the land of your sojournings, all the land of Canaan, for an everlasting possession; and I will be their God.”

9 And God said to Abraham, “As for you, you shall keep my covenant, you and your descendants after you throughout their generations.

10 This is my covenant, which you shall keep, between me and you and your descendants after you: Every male among you shall be circumcised.

11 You shall be circumcised in the flesh of your foreskins, and it shall be a sign of the covenant between me and you.

12 He that is eight days old among you shall be circumcised; every male throughout your generations, whether born in your house, or bought with your money from any foreigner who is not of your offspring,

13 both he that is born in your house and he that is bought with your money, shall be circumcised. So shall my covenant be in your flesh an everlasting covenant.

14 Any uncircumcised male who is not circumcised in the flesh of his foreskin shall be cut off from his people; he has broken my covenant.”

15 And God said to Abraham, “As for Sar’ai your wife, you shall not call her name Sar’ai, but Sarah shall be her name. 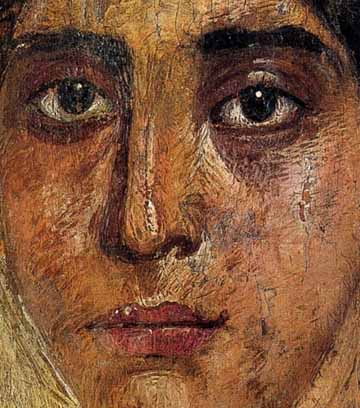 Portrait of an older woman,
from the Fayum coffin portraits in Egypt

17 Then Abraham fell on his face and laughed, and said to himself, “Shall a child be born to a man who is a hundred years old? Shall Sarah, who is ninety years old, bear a child?”

18 And Abraham said to God, “O that Ish’mael might live in thy sight!”

19 God said, “No, but Sarah your wife shall bear you a son, and you shall call his name Isaac. I will establish my covenant with him as an everlasting covenant for his descendants after him.

20 As for Ish’mael, I have heard you; behold, I will bless him and make him fruitful and multiply him exceedingly; he shall be the father of twelve princes, and I will make him a great nation.

21 But I will establish my covenant with Isaac, whom Sarah shall bear to you at this season next year.”

22 When he had finished talking with him, God went up from Abraham. 23 Then Abraham took Ish’mael his son and all the slaves born in his house or bought with his money, every male among the men of Abraham’s house, and he circumcised the flesh of their foreskins that very day, as God had said to him.

24 Abraham was ninety-nine years old when he was circumcised in the flesh of his foreskin.

25 And Ish’mael his son was thirteen years old when he was circumcised in the flesh of his foreskin.

26 That very day Abraham and his son Ish’mael were circumcised;

27 and all the men of his house, those born in the house and those bought with money from a foreigner, were circumcised with him.

The Birth of Isaac

2 And Sarah conceived, and bore Abraham a son in his old age at the time of which God had spoken to him.

3 Abraham called the name of his son who was born to him, whom Sarah bore him, Isaac.

4 And Abraham circumcised his son Isaac when he was eight days old, as God had commanded him.

5 Abraham was a hundred years old when his son Isaac was born to him.

6 And Sarah said, “God has made laughter for me; every one who hears will laugh over me.”

7 And she said, “Who would have said to Abraham that Sarah would suckle children? Yet I have borne him a son in his old age.”

Hagar and Ishmael Sent Away

8 And the child grew, and was weaned; and Abraham made a great feast on the day that Isaac was weaned. 9 But Sarah saw the son of Hagar the Egyptian, whom she had borne to Abraham, playing with her son Isaac. 10 So she said to Abraham, “Cast out this slave woman with her son; for the son of this slave woman shall not be heir with my son Isaac.” 11 And the thing was very displeasing to Abraham on account of his son. 12 But God said to Abraham, “Be not displeased because of the lad and because of your slave woman; whatever Sarah says to you, do as she tells you, for through Isaac shall your descendants be named. 13 And I will make a nation of the son of the slave woman also, because he is your offspring.” 14 So Abraham rose early in the morning, and took bread and a skin of water, and gave it to Hagar, putting it on her shoulder, along with the child, and sent her away. And she departed, and wandered in the wilderness of Beer-sheba. 15 When the water in the skin was gone, she cast the child under one of the bushes. 16 Then she went, and sat down over against him a good way off, about the distance of a bowshot; for she said, “Let me not look upon the death of the child.” And as she sat over against him, the child lifted up his voice and wept. 17 And God heard the voice of the lad; and the angel of God called to Hagar from heaven, and said to her, “What troubles you, Hagar? Fear not; for God has heard the voice of the lad where he is. 18 Arise, lift up the lad, and hold him fast with your hand; for I will make him a great nation.” 19 Then God opened her eyes, and she saw a well of water; and she went, and filled the skin with water, and gave the lad a drink. 20 And God was with the lad, and he grew up; he lived in the wilderness, and became an expert with the bow. 21 He lived in the wilderness of Paran; and his mother took a wife for him from the land of Egypt. 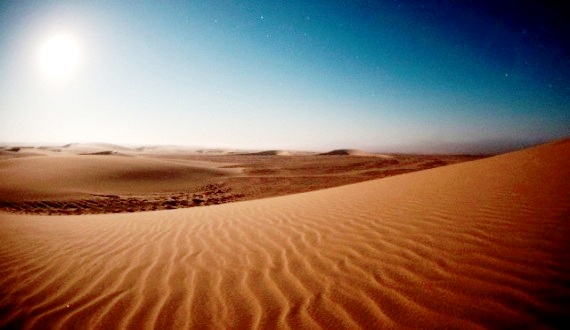 Famous paintings
of Hagar and
Abraham