Joanna, disciple of Jesus – who was she?

An insider at the court of Herod 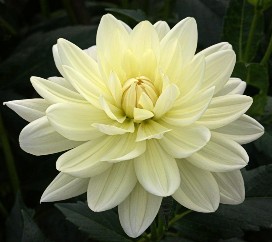 The story of Joanna had 3 parts:
1 Who was Joanna? The world of a 1st century noblewoman at Herod’s court.
2 Joanna the disciple of Jesus of Nazareth: How did she meet Jesus? How did she help him? Luke 8:1-3
3 Joanna on the morning of the Resurrection: Joanna was among the first to see the miracle of the Resurrection. Luke 24:1-12 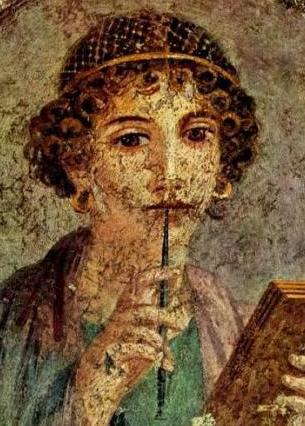 She was married, probably at a young age, to Chuza, who oversaw the complicated household of Herod Antipas, rulerof Galilee (not king; his father had the title of king, but Antipas did not).

Herod’s main place of residence was in Galilee, not far from Nazareth where Jesus grew up. This is probably where Joanna heard about, and later met, Jesus.

Antipas was one of the surviving sons of the legendary King Herod whose paranoia led him to murder anyone who might even remotely threaten his grip on power. King Herod murdered his wife, his two sons, his mother- and brother-in-law, and the innocent children of Bethlehem who were massacred at about the time Jesus was born.

Herod Antipas, King Herod’s son and Chuza’s master, only survived by being conspicuously under-achieving, and therefore no real threat to anyone.

Antipas made laziness into an art form, but he was also cunning and possibly licentious, with a complicated family structure. Running Herod Antipas’ household was fraught with danger: Chuza must have been a competent, dedicated and discreet servant to his master.

Much of the inside information about Jesus’ trial and torture may have come from Joanna. She had access to buildings and people the Galileans did not.

Joanna becomes a disciple of Jesus 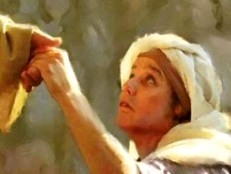 Jesus takes a woman by the hand to raise her

At some stage in Joanna’s life Jesus of Nazareth cured her of an unspecified illness. Luke’s gospel mentions ‘evil spirits’ and ‘infirmities’, which means that Joanna’s illness could have been almost anything.

The Roman world might not know about bacteria, but they knew that illness could be caused by something malevolent from outside entering your body.

When they suspected that this had occurred, or when they simply had no explanation for an illness, they ascribed it to an ‘evil spirit’.

Whatever Joanna’s illness was, Jesus cured it. She saw his power at first hand and needed no further convincing.

She became a disciple, following him wherever he went. Because she was influential, well-connected and wealthy, she was able to smooth the way for Jesus – provide for him financially and protect him in various subtle ways.

He needed protecting. He was forthright, blunt in his criticism of the rich and the powerful. This made him many enemies. Joanna and the other two women mentioned in Luke 8:1-3, Mary Magdalene and Susanna, did everything they could to help him.

Without backers like her, Jesus would not have been able to travel as far or speak to as many people as he did. Joanna was instrumental in his mission.

Joanna at the Resurrection of Jesus 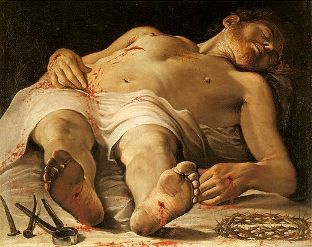 Like Mary Magdalene, Joanna stayed with Jesus to the end – and beyond. Luke names her as one of the three women who visited the tomb early on Easter morning, finding it empty.

Why were they there? They had gone there to finish a terrible task: washing his battered body and wiping away the body fluids that had congealed after he died.

Cleaning the dead body of a relative was a normal task for 1st century Jewish women. Since there were no family members present in Jerusalem (Luke does not mention Mary the mother of Jesus), Mary Magdalene, Joanna and Mary the mother of James took over the responsibility.

The task was not completed on the Friday evening after Jesus’ death, so they returned (after Saturday, the Sabbath) at first dawn on Sunday morning.

What did the women find at Jesus’ tomb?

To their horror they saw that the tomb was not sealed as they had left it, but open. 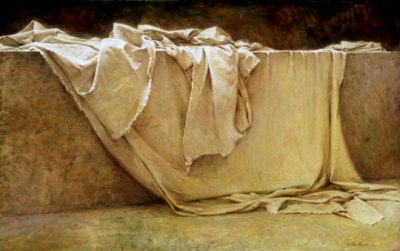 Reconstruction of the interior of the tomb of Jesus, with the discarded shroud

When they entered, they found it empty. There was no body lying on the stone slab. All that remained were the linen clothes in which they had wrapped Jesus’ body.

To make matters even more terrifying, they had a strange experience that is not easily explained. They saw something that the gospels called ‘angels’ (see What are angels? What does ‘angel’ mean?).

These dazzling beings asked the women why they were looking for Jesus in a tomb, a place reserved for the dead? They said that Jesus was not here because he was living, not dead.

What did the women do?

Dazed with shock, they left the tomb and ran back to find the male disciples. They told them what had happened. The men did not believe them.

But when they insisted, Peter decided to go and check for himself. He found that they had been telling the truth. The body of Jesus was gone and only the linen clothes used to wrap his body remained.

Joanna was among the first – perhaps the very first – to bring news of the Resurrection to a waiting world.

What are the main ideas in Joanna’s story?

1 Soon afterward he went on through cities and villages, preaching and bringing the good news of the kingdom of God. And the twelve were with him, 2 and also some women who had been healed of evil spirits and infirmities: Mary, called Mag’dalene, from whom seven demons had gone out, 3 and Joan’na, the wife of Chuza, Herod’s steward, and Susanna, and many others, who provided for them out of their means. 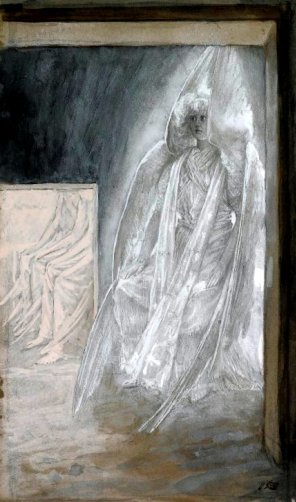 Angels at the entrance of the tomb of Jesus, James Tissot

1 But on the first day of the week, at early dawn, they went to the tomb, taking the spices which they had prepared. 2 And they found the stone rolled away from the tomb, 3 but when they went in they did not find the body. 4 While they were perplexed about this, behold, two men stood by them in dazzling apparel; 5 and as they were frightened and bowed their faces to the ground, the men said to them, “Why do you seek the living among the dead? 6 Remember how he told you, while he was still in Galilee, 7 that the Son of man must be delivered into the hands of sinful men, and be crucified, and on the third day rise.” 8 And they remembered his words, 9 and returning from the tomb they told all this to the eleven and to all the rest. 10 Now it was Mary Mag’dalene and Jo-an’na and Mary the mother of James and the other women with them who told this to the apostles; 11 but these words seemed to them an idle tale, and they did not believe them. 12 But Peter got up and ran to the tomb; stooping and looking in, he saw the linen cloths by themselves; then he went home, amazed at what had happened.

Paintings of the Women at the Tomb 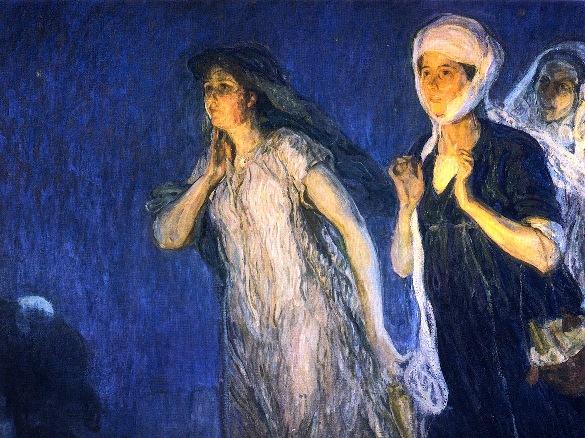 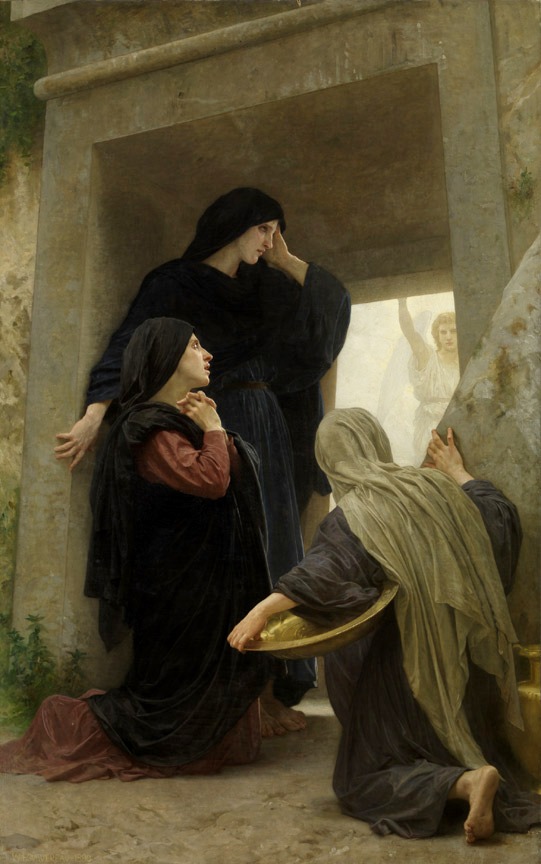 The Women at the Tomb,
George Bourguereau 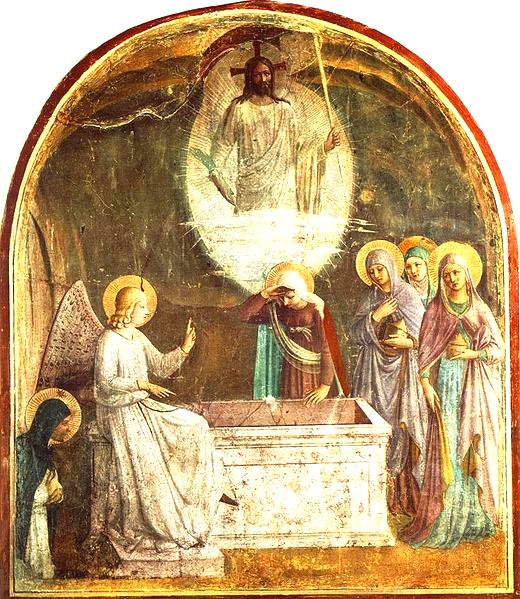 Women at the empty tomb, 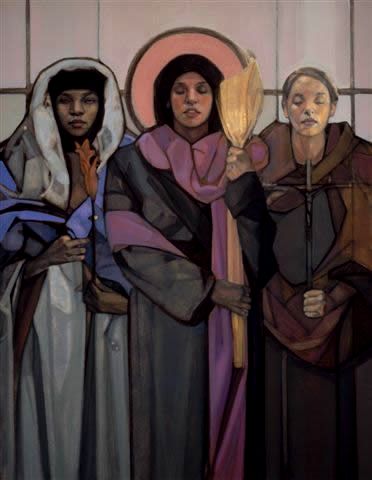 Mary Magdalene, Susanna and Joanna
by Mary McKenzie of the Nativity Project 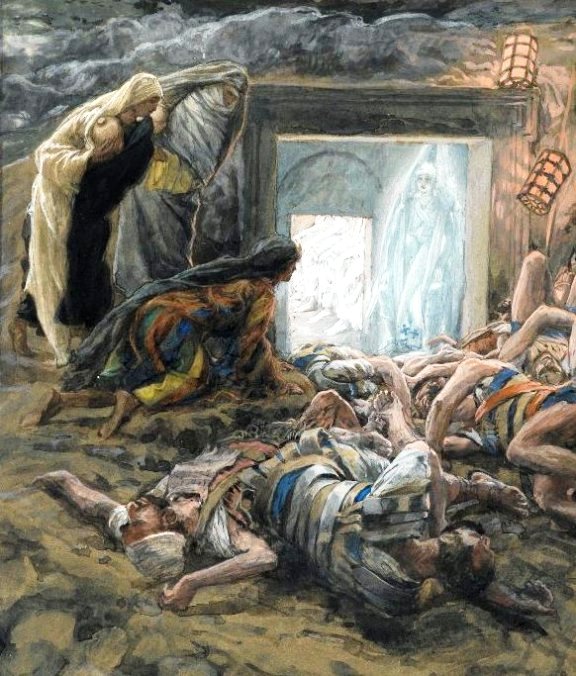 The Holy Women at the Tomb, James Tissot

Joanna, disciple of Jesus of Nazareth

Women
at the tomb
of Jesus