Who was Naomi in the Bible story?

Naomi’s story had a bleak beginning.

She seems to have inherited nothing, no land or goods, and her only option was to return to her native village, where she owned a little piece of land.

She told her two daughters-in-law, Orpah and Ruth, of her decision and prepared to bid them good-bye. They should, she said, go back to their mothers’  (curiously, not fathers’) homes.

Neither of them wanted to leave her, which says a lot about Naomi as a mother-in-law, but Naomi insisted, and one of them, Orpah, finally agreed to go home to her birth family.

The other young woman, however, was made of sterner stuff. She would not leave Naomi, and that was that.

The girl’s name was Ruth, and she clung to Naomi, literally clung to her, and refused to part.

The mother-in-law is the heroine!

This is significant. Naomi was a mother-in-law, usually the butt of cruel jokes, but in this story the mother-in-law inspired dogged loyalty. 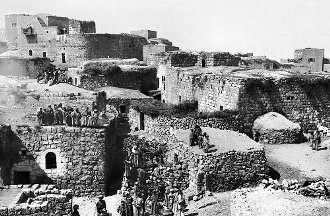 Bethlehem may have looked something like this Middle Eastern village

The two women, Naomi and Ruth, set off on an arduous journey. It was late summer, and the roads were not safe for two lone women. Eventually, however, they arrived in Naomi’s home town: Bethlehem.

The whole town seems to have turned out to see them, but their initial joy soon quietened. Naomi’s friends and family were aghast to see how much she has changed. The years were now etched into her face. ‘Can this be Naomi?‘ they asked.

Right back at you, says Naomi: ‘don’t call me Naomi (pleasant); call me Mara (bitter) instead. The years have been unkind to me. I’ve lost everything‘.

Well, not quite everything. She still has two assets:

Looking for a husband 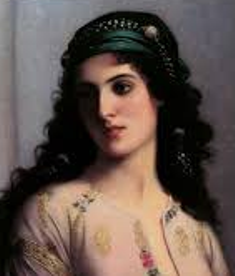 The thing that would solve Naomi’s problem was, of course, a rich husband for Ruth. Naomi immediately sets out to find one.

She does not have far to look. Elimelek, her dead husband, had a relative called Boaz who, though no longer young, was rich and kindly. Despite his undoubted suitability as a husband, he has never married. He is a long-standing bachelor, and none of the fond mothers with pretty daughters have been able to change his mind.

But he notices Ruth immediately (a good sign) when he sees her gathering surplus grain in one of his fields (there was an injunction in the Bible that the poor be allowed to gather suplus grain, and Boaz is obviously following this injunction – another good sign.)

He approaches Ruth and tells her to gather grain in his field and not to go anywhere else. 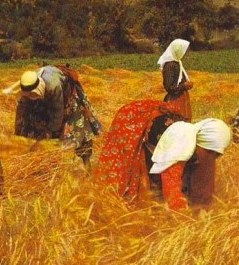 Women gathering in the harvest

Why are you being so kind? asks Ruth – though of course she has guessed. Because you are a woman of good repute, replies Boaz.

And who has given her this good repute? Naomi, who has been cleverly extolling Ruth’s virtues to all and sundry.

Ruth replies with a graceful speech; her behaviour is impeccable. Boaz later invites her to eat with him.

No doubt Boaz’s attentions to Ruth have been reported back to Naomi, not just by Ruth but by the village women, watching agog as the romance develops.

So far, so good. But Boaz is a confirmed bachelor, and Naomi realizes she must nudge him into some sort of definite commitment if she is to get him as a son-in-law.

The harvest festival is about to be celebrated, and Naomi decides that the time for subtlety is past. She has, she tells Ruth, a definite goal: to find a home for Ruth where she will be well-provided for.

She gives Ruth some instructions:

It must be explained that in the Bible ‘feet’ was sometimes a euphemism for male genitals, and that there was a good deal of ribald joking at harvest festivals.

But Naomi was banking on her belief that Boaz would react honorably in this situation. As you will see, she was a good judge of character.

Ruth went to the threshing floor and did just as Naomi had told her, except that she took it a step further. She, not Boaz, proposed: ‘Spread the corner of your garment over me’ she said. At the time, ‘spreading one’s garment over someone’ meant marrying them.

Boaz reacted exactly as Naomi had hoped. He immediately offered marriage to Ruth, recognising that she had put herself in a compromising position and that the honorable thing was to offer marriage.

Naomi with her grandson Obed, detail from a painting by Levy

There were some minor details to be attended to. The following morning Boaz met with a council of elders and hammered out the details of a marriage agreement.

But Naomi knew that her plan had worked – and what is more, had worked magnificently. Both women could look forward to a comfortable, happy future. Both women would be well provided for.

And the story ended with the best news of all: Naomi, who had once asked to be called ‘bitter’, now held her little grandson, born to Ruth and Boaz, in her arms:

‘Then Naomi took the child in her arms and cared for him. The women living there said ‘Naomi has a son!’ And they named him Obed. He was the father of Jesse, the father of David…’ 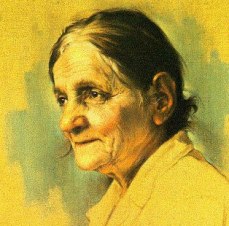 Naomi means ‘pleasant’, but the name she used later was Mara, meaning ‘bitter’.
Ruth is a short version of ‘retut’, ‘lovely friend’.
Boaz means ‘powerful’ or ‘strong’.
Mahlon and Chilion, the sons of Naomi, mean ‘sickness’ and ‘used up’.
Orpah means ‘back of the neck’; she turned her back on Naomi.
Elimelech means ‘my God is king’.

Link to the Bible text for Naomi’s story 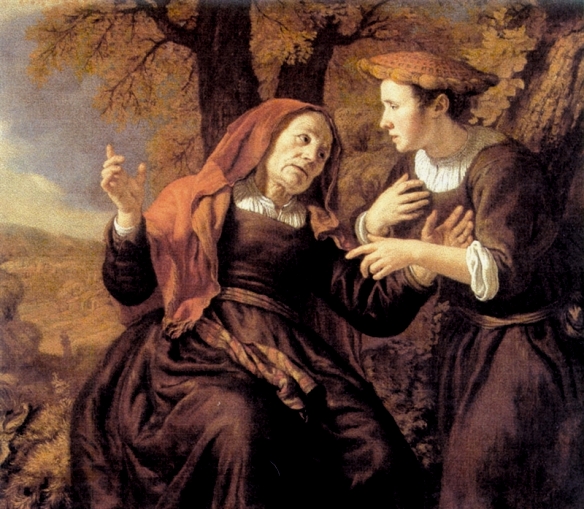 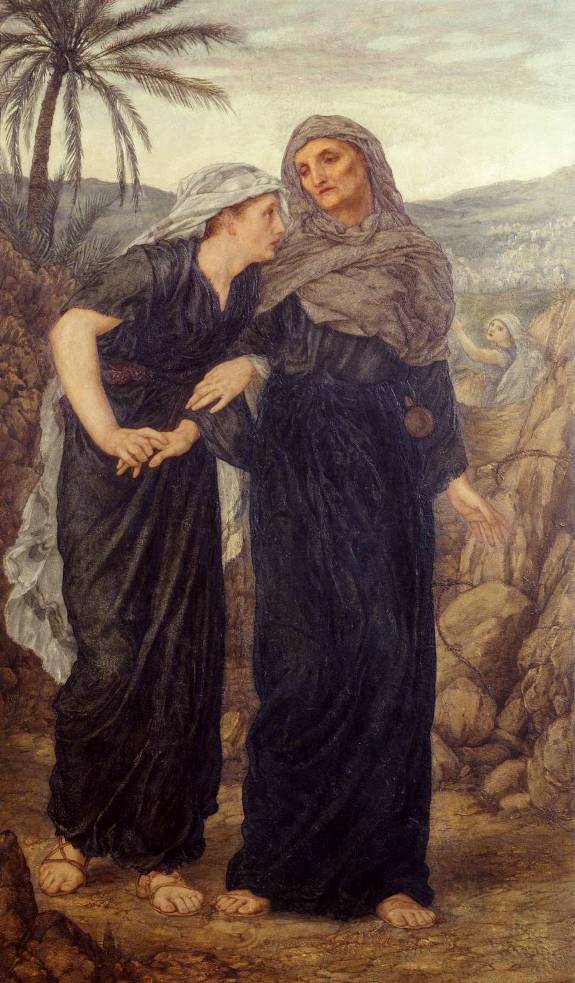 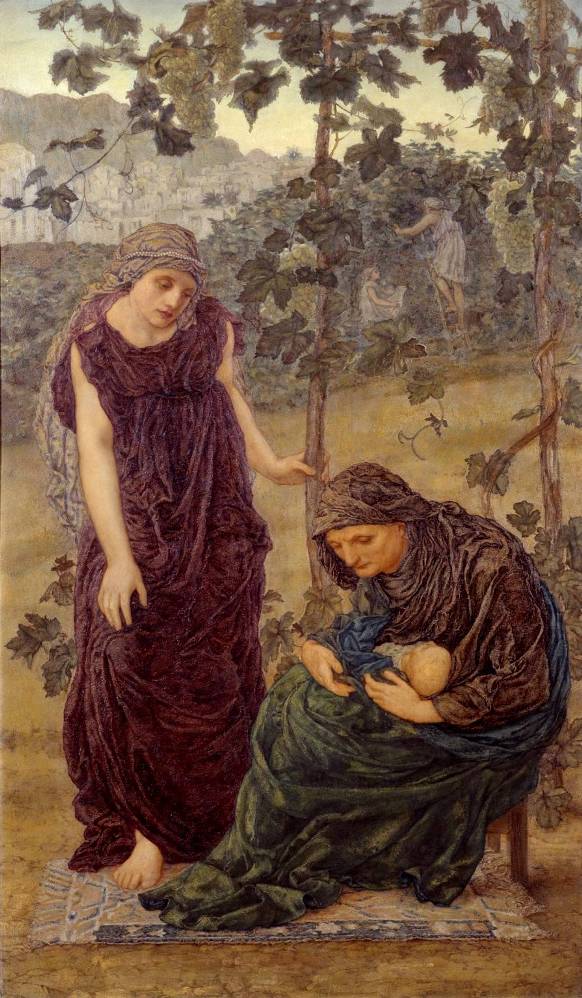 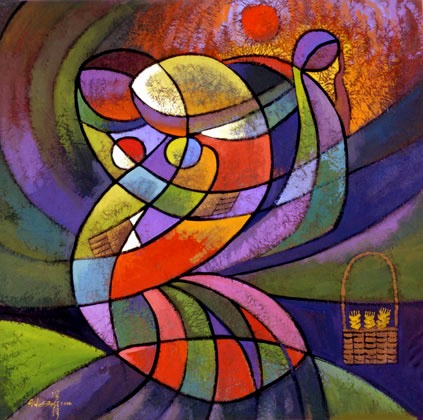 Naomi and Ruth, He Qi 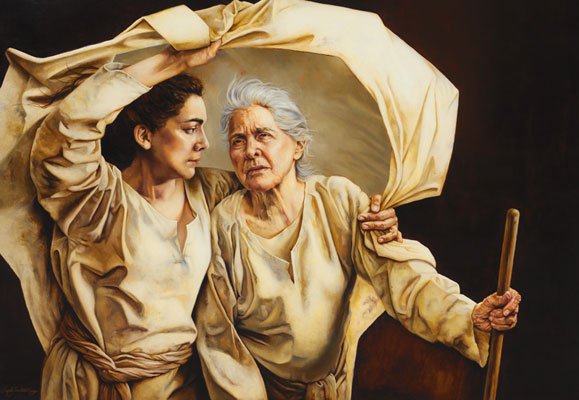 Gagon says ‘My desire is to serve the Lord through my paintings’. Note the darkness behind the two women: this is their past. Note also the lines of sorrow etched on Naomi’s face, and the determination of Ruth to protect her. 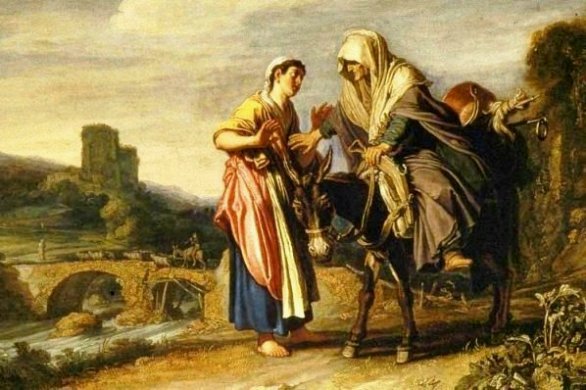 Most paintings of this scene focus on Ruth, but this shows Naomi as the active agent, pushing her daughter-in-law back towards her own people. Note the patient stance of the donkey loaded to the gills for a long journey. 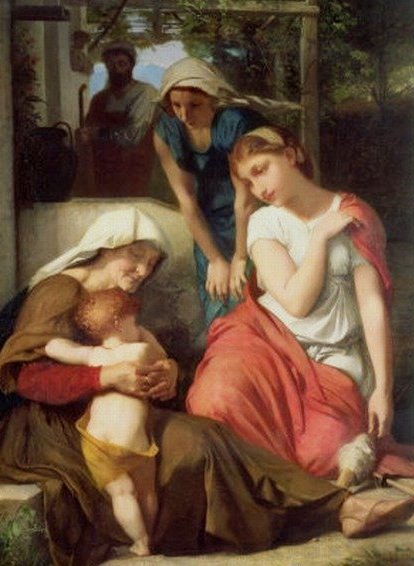 An extraordinary image of the tender love between grandmother and grandson.
Boaz stands protectively in the background.

Read about
more fascinating women
of the Old and New Testaments

Bible Study Resource for Women in the Bible: Naomi, Ruth and Boaz in Bethlehem

Naomi –
on this page

How to get a husband 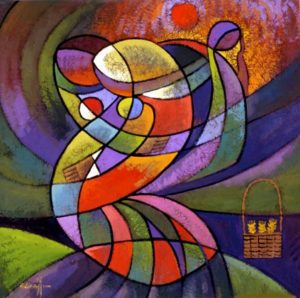